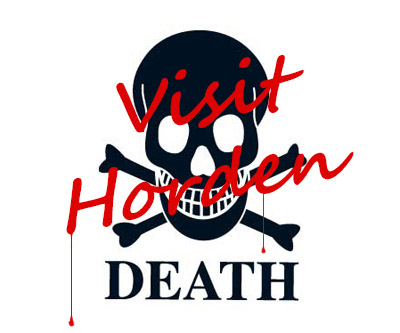 If you didn’t already know, Death see their 15th birthday this year and to celebrate they have been on tour hitting up as many spots as possible over the space of a few days. Part of that tour brought them up to the North East. I’ve known one of the flow riders for Death, Sam “Blinky” Hutchinson, for a few years and in the past shown him some of the street spots around Peterlee and Horden. As Death were in the North East, and Blinky being from Sunderland, he was asked if there are any obscure spots that they could skate on their way southbound and Blinky said he wanted to hit one of the spots I’d shown him in Horden.

Anyway, 5 o’clock and Blinky rings again, saying something about directions not being his thing and could I meet them to just taken them directly to the spot. Being such a top bloke I give them the SatNav for East Durham Collage and met them in the car park. After a quick hello to a mini-bus full of Death I get them to follow me to a shady looking bit of road where I pull over before a short walk to the spot. Nick Zorlack, Death’s Boss, not being down with the shadiness of the road decides to stay with the mini-bus while we head off to skate.

I’d like too say we got to the spot and the Death team killed it, shutting it down for all future skateboarding thereafter, but truth be known it was more like a visit to the monkey cages at the zoo. It started well enough, first there was a fast hill bomb down into the Dene, always enjoyable. Then we get to the actual spot which is basically two gnarly flat banks facing each other with some flat ground in the middle and a stinky pool of water at the end of it. 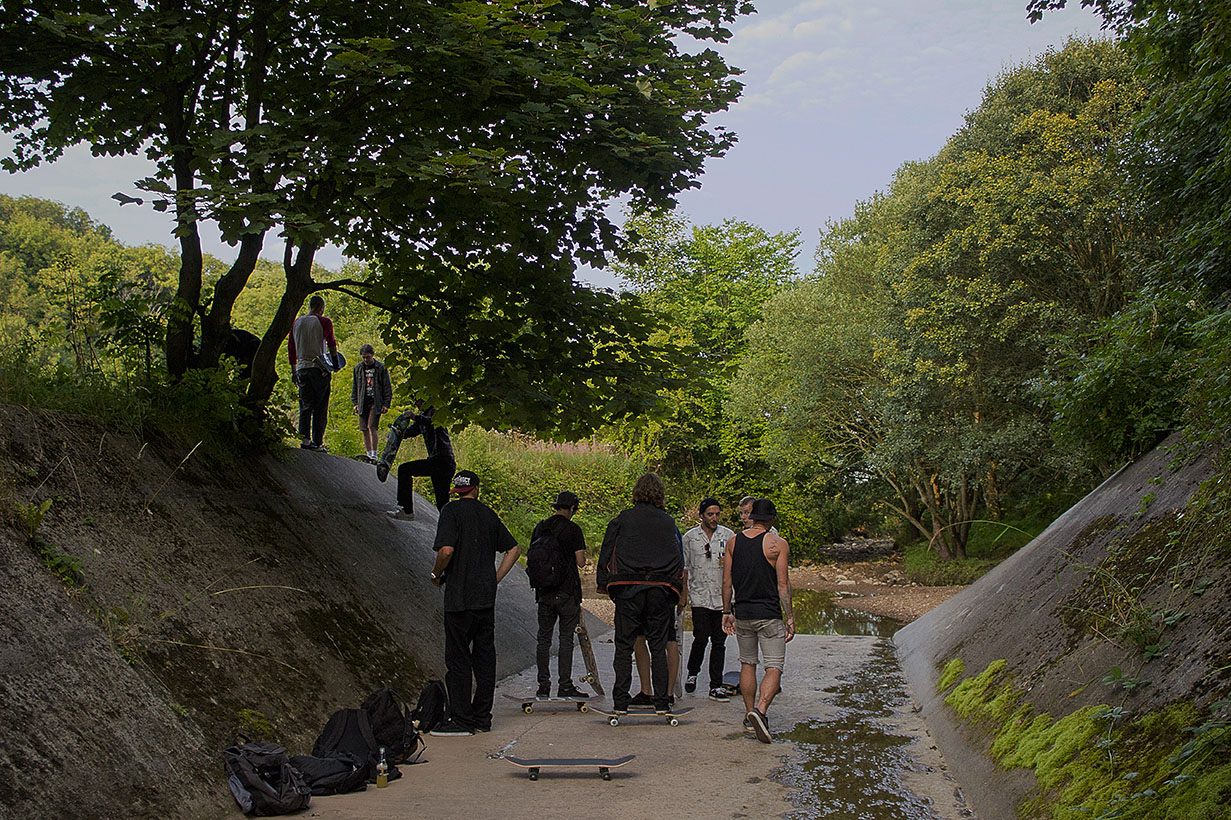 A few of the guys start dropping in and getting the feel of the banks while a few others are happy just supping a few beers and exploring the area. Blinky and a couple of the lads start doing ollies into it, Rob Smith starts climbing in the trees looking for some way of either tail dropping or nose-blunt pulling into the bank. mark “radman” Radden starts to attempt a kickflip into it. Everyone, except Rob who is still wrestling with the trees, stands and watches Mark attempt the kickflip and the video camera comes out. Mark, after a few attempts, sticks one and gets the ride out. 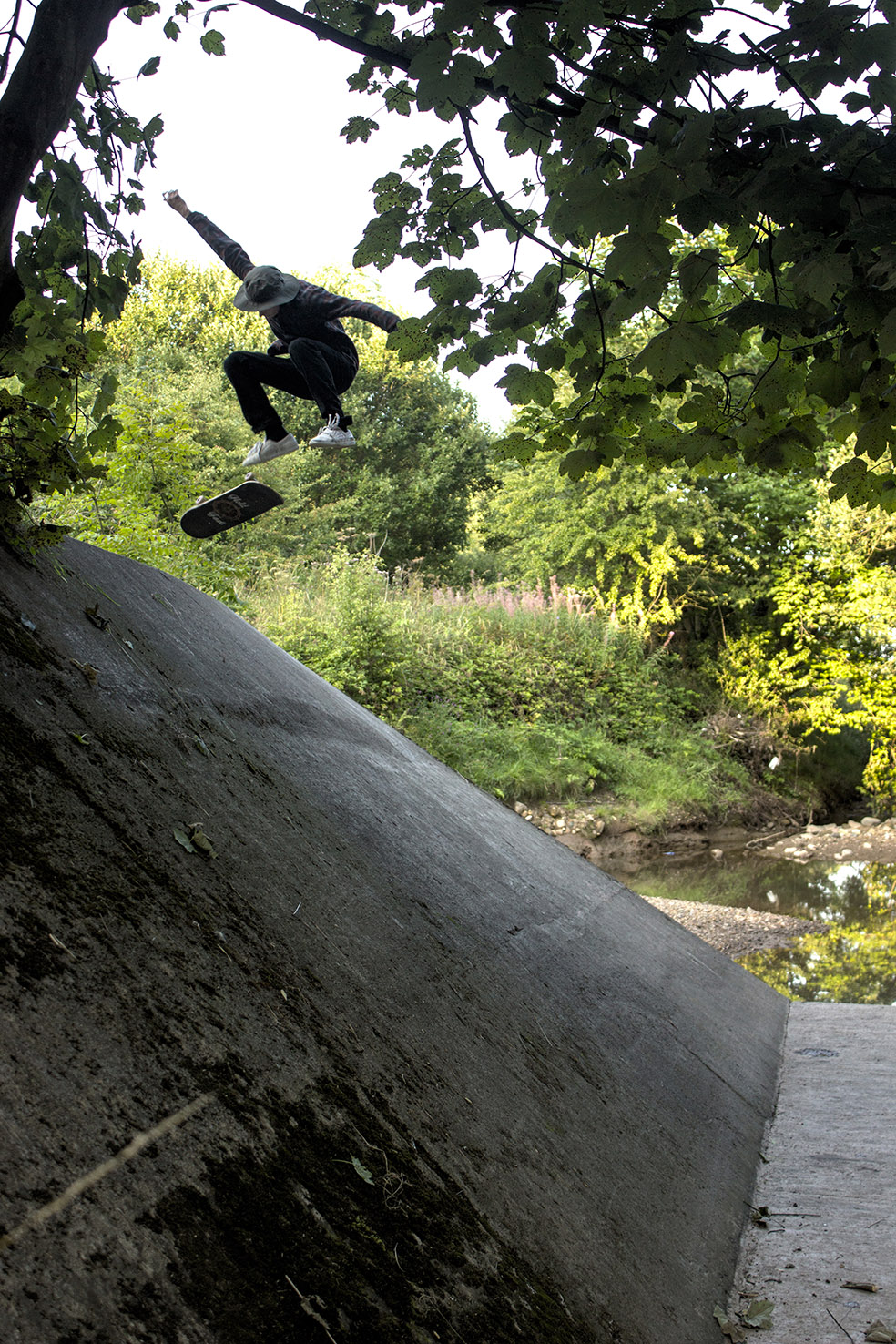 We all cheer and offer the relevant congratulations. Mark says he thinks he can get a better one so we all leave him to it and see if Rob is any further with finding somewhere to drop in from. Rob must have mutilated 3 different trees looking for just the right branch and still couldn’t find what he wanted even though just about everyone offered some form of “helpful advice”. 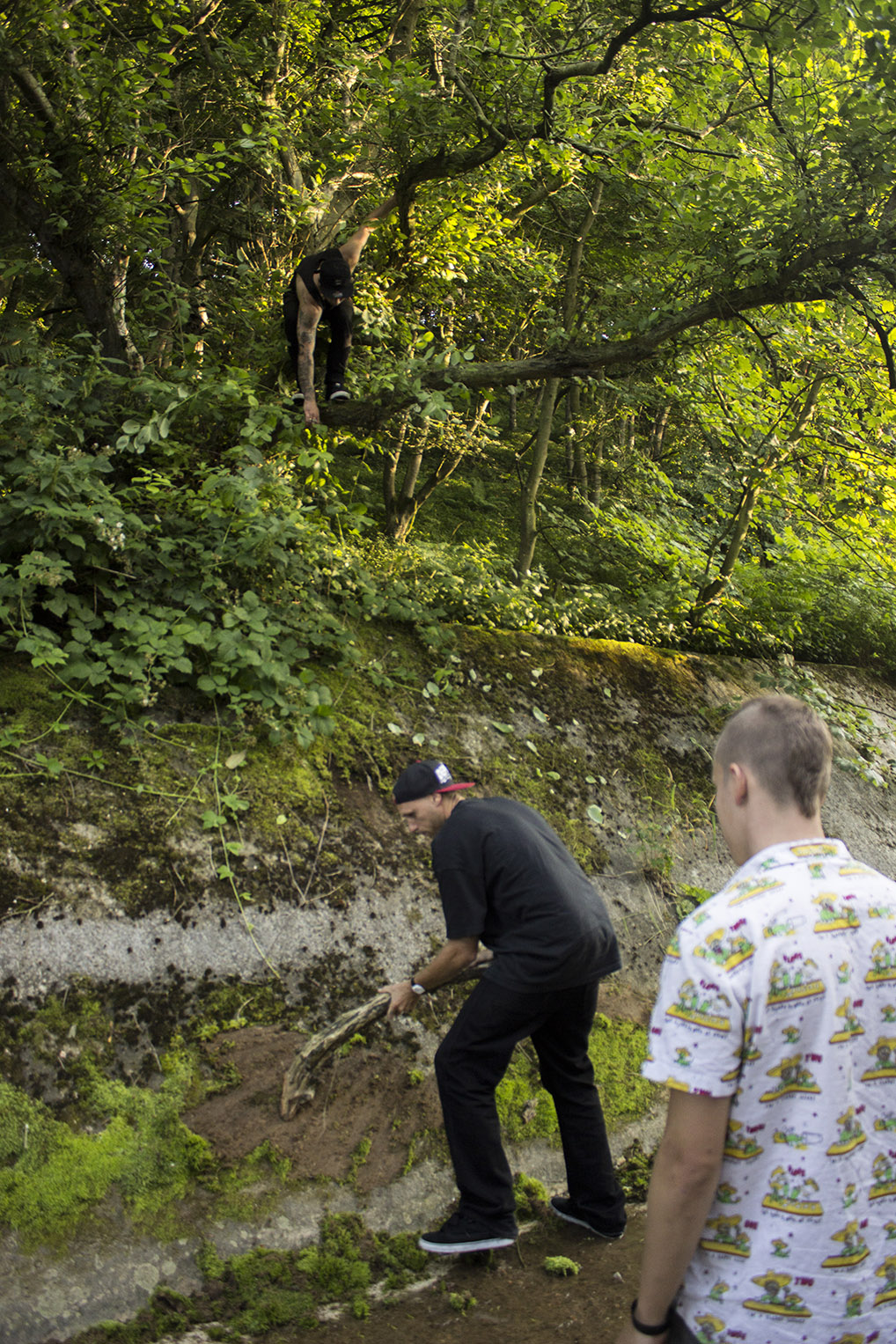 After much swinging from branches, hacking of brambles and scraping away of moss we hear something like “Oh no no no, shit, awe man no!”. While mark had been trying to get another kickflip his board decided to take a little swim, unfortunately skateboards swim about as good as bricks do. Now I don’t know if you’ve ever been to this spot before but you don’t really want to be going in that water. At best you’ll probably have the trots the next day if you got a mouthful of it, I mean part of the reason it is there is because of the sewerage station you have to pass to get there. So, in an attempt to avoid having to make any contact with the water, people started looking for sticks and branches that might be used to fish his board out. This kinda turned into a 2 way stone skimming battle for a short while, obviously ending in not being able to fish out the board. Mark decides that going in the water is the only way forward if he expected to get his board back, although by this time the wood is probably ruined but the trucks and wheels etc would still be OK. 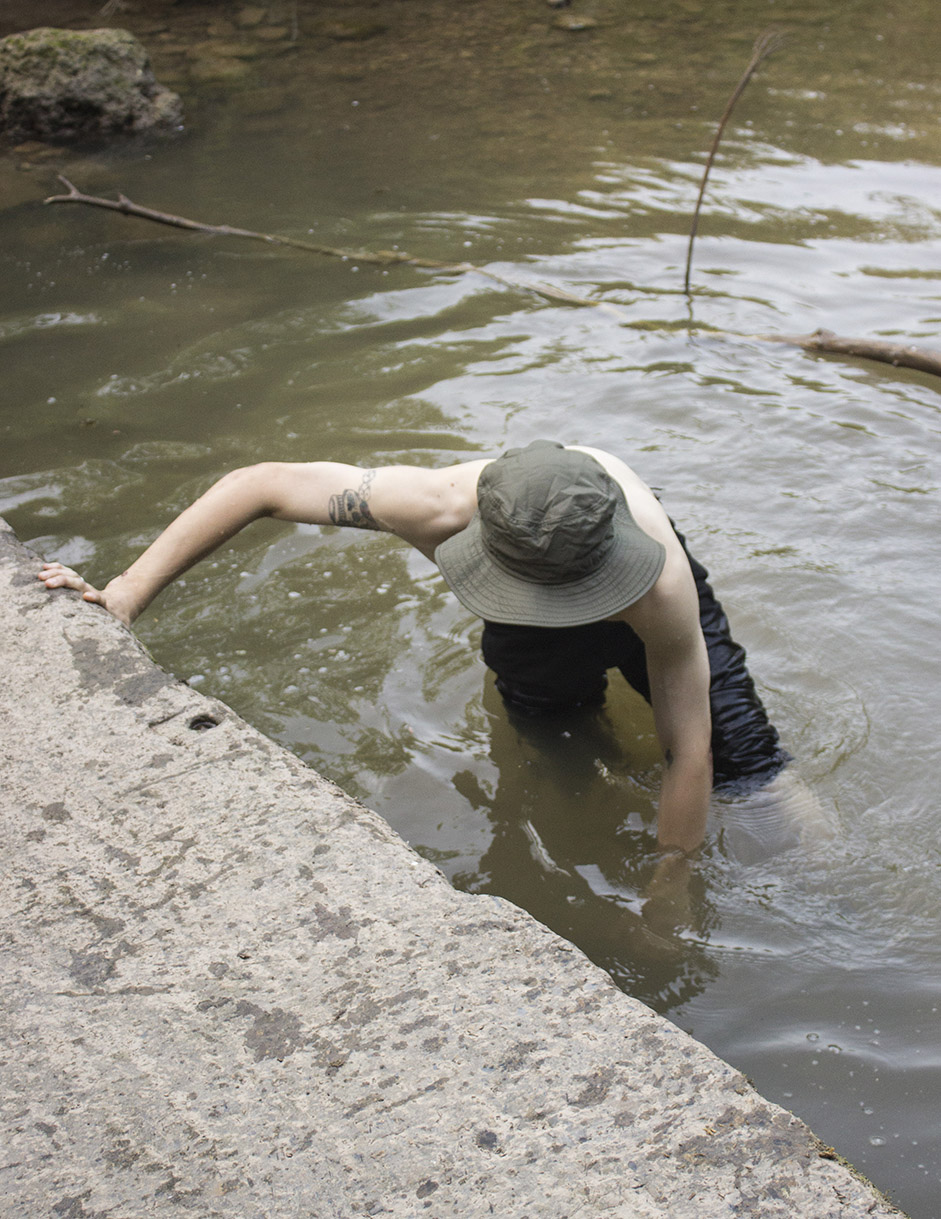 Mark gets half-starkers and slowly eases himself into the water, it’s near balls deep, you can see from the picture above that the water is dirty, anything submerged any deeper than 4 or 5 inches just seems to disappear. Everyone stands about watching and of course offering lots of “helpful advice” but Mark is having no luck, although still determined to find his board. At this point I’m taking a few photos as Mark bravely sloshes about in the grey mucky pool, I can hear something to the right of me, kinda like someone trying to get a stubborn lid off a jar or something, and people are laughing and stuff. Timmy Garbett is only curling a brown one off into the water almost right next to Mark. 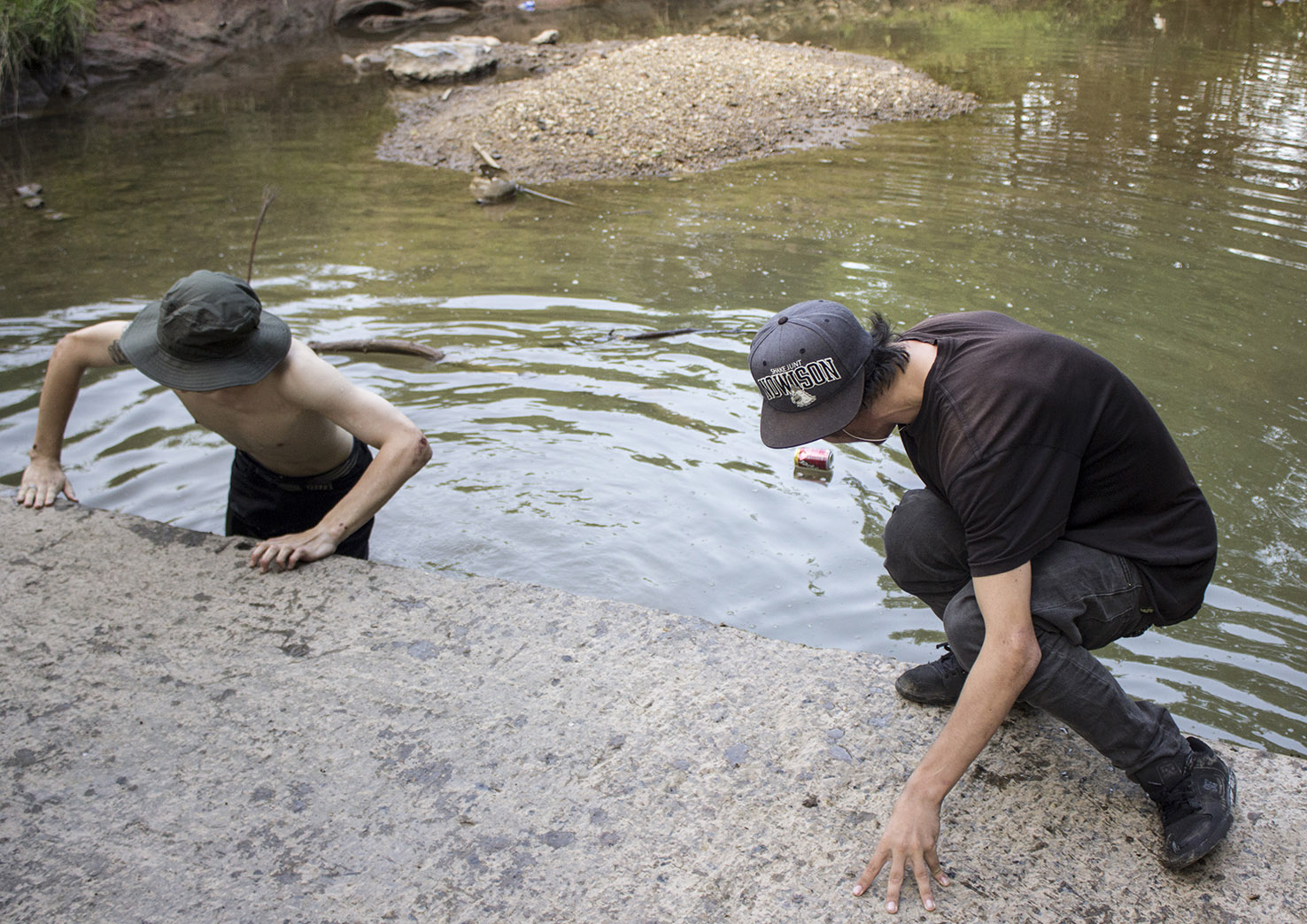 Needless to say Mark is not best pleased at all, gets out of the water faster than I’ve ever seen any man move, and chases Timmy off while he tries to pull up his kegs. Everyone agreed that it was bang out of order and that Timmy should now be the one that has to fish out Mark’s board. Timmy, unable to see the error of his ways and more concerned about the fact he’d hurt his bum hole because he didn’t even need a poo and had to force one out, eventually agrees to poke a stick around in the water for 10 minutes before everyone decides he’s put enough of a stink on the session and it’s time to head off. We all grab our stuff, head back to the mini-bus, say our goodbyes and head our separate ways.

An interesting visit, not a lot of skateboarding when down, but it was easily the highlight of my Thursday. A big thank you to Blinky for calling me up and bringing all the boys to visit. Thank you to all the Death Skateboards crew for a thoroughly entertaining evening, you’re welcome back again any time you like, just hit me up.

Here is a bit Death footage for you, enjoy.

Pra Loup with Urban Surfer: A Ski and Snowboard Trip to the French Alps